Looking for something awesome to do in town? Check out the Phong Nha Eco Conservation Tour! 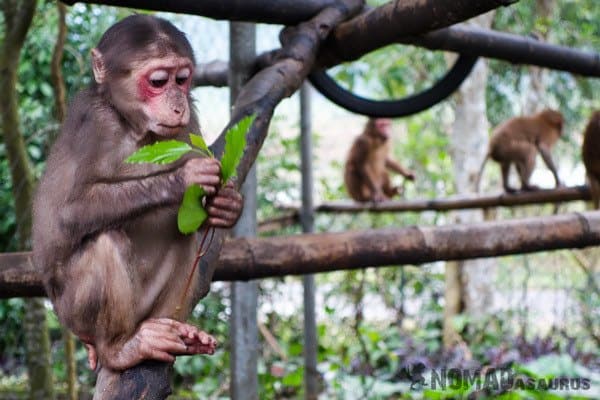 Straddling the border of Laos and Vietnam, the karst landscape that makes up the Phong Nha-Ke Bang National Park is home to over 700 different plant varieties, 259 kinds of butterflies and 10 unique primate species.

UNESCO declared the national park a World Heritage Site in 2003 in recognition of its high levels of biodiversity and peculiar topography.

Since the 2009 rediscovery of Hang Son Doong, the world’s largest cave, tourism has been increasing at rapid and exponential rate.

More global eyes than ever are now turned on this amazing area. Due to this, and the proposed cable car possibly being built, environmental conservation is a task that needs to be focused on heavily.

One of the local men who is taking charge of this mission is Hai, who runs his fascinating eco conservation tour in the town.

Having grown up in the Quang Binh province, in which Phong Nha is a part of, Hai has always been deeply passionate about the conservation of the natural environment and wildlife in the area.

Having studied to become an English teacher at the University of Hue, he then returned to Phong Nha to start working with the primate rescue projects in the region.

Hai then began studying Environment and Wildlife Management via correspondence through an Australian college. As tourism grew, he developed his eco conservation tour in the hopes of educating locals and foreigners about the importance of protecting the environment.

With sustainability being a passion of ours, we couldn’t wait to sign up for his tour.

Don’t miss our guide for Travel To Vietnam and get the most out of your trip!

Leaving via motorbikes from the Bamboo Cafe in Phong Nha, the first stop on Hai’s Eco Conservation Tour is the Wildlife Rescue Station.

Sponsored by the Cologne Zoo in Germany, the rescue centre is used to shelter, rehabilitate and release confiscated animals from around Vietnam.

Most of the rescued animals are macaque monkeys, although also housed are porcupines, monitor lizards, pythons and peacocks.

These species are often captured by illegal hunters to be used for food, traditional “medicine” or sold as pets.   Hai gave us a detailed briefing about the mission of the Wildlife Rescue Station and walked us around all the enclosures.

Unlike some of the other fauna conservation projects we have seen in Southeast Asia, here you are required to change into clean gumboots and wear a medical face mask to reduce the chance of spreading disease.

Despite the small size of the program, the welfare of the animals is paramount.

Jumping back on the bikes we rode into the Phong Nha-Ke Bang National Park. The scenery is absolutely breathtaking, with imposing limestone cliffs rising dramatically from the forested valley.

The impression of stepping back into a prehistoric era is evident.   The next stop on the eco conservation tour is the Botanical Gardens, located in the Environmental And Eco-Tourism Interpretation Site.

Here in Southeast Asia, botanical gardens have a different meaning to what is associated back in the Western world.

Rather than containing a carefully controlled and manicured garden, native plants and reintroduced into the wild and allowed to grow freely – exactly as nature intended.

Another informative talk was given by Hai about some of the work that is being done by the national park regarding the rehabilitation of the heavily bombed and logged environment.

Amongst the primary forest, we walked down a paved path towards the Gio waterfall. Due to the high amount of rain over the previous few days, the falls were powerful and made for a magnificent sight. 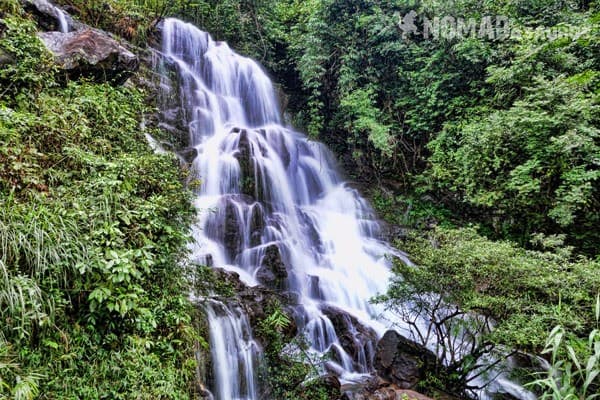 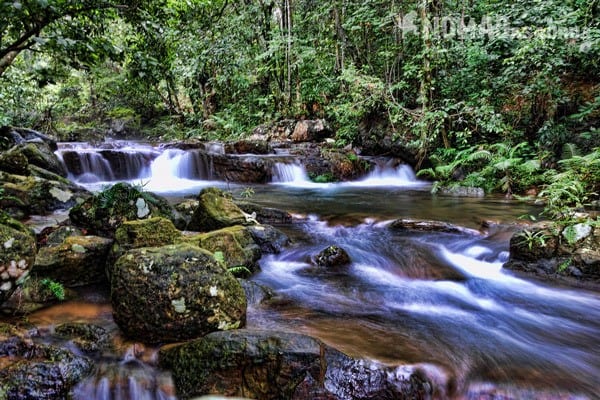 As the weather was cold and overcast, Hai figured we would not have much chance of spotting many of the local fauna that is normally encountered on his eco conservation tour.

So instead he decided to take us trekking down a different route – One that he had not taken other tourists on before.

For almost three hours we hiked and climbed our way through the dense jungle. The path was heavily overgrown, so Hai, along with his assistant Khoa, cleared the way with the use of a machete.

For centuries the people of Phong Nha have relied on the jungle to survive, and their expertise in this environment is unparalleled. Hai stopped us for rest breaks beneath the lush canopy while pointing out intriguing plant species and twisting vines.

The area around Phong Nha was one of the most heavily bombed regions of the Vietnam/American War, and large craters left over from aerial bomb attacks can be spotted throughout the jungle.

Another tragic reminder that this beautiful paradise was once a living hell for those on the ground between 1964 and 1975.

Eventually we walked out of the jungle and returned to the interpretation centre. The staff at the Botanical Gardens knew we would be ravishingly hungry and had been busy preparing a gargantuan lunch for us.

In standard Vietnamese fashion, we ate communally on a large mat placed on the floor, and quickly filled our stomachs with barbecued pork, steamed bamboo and vegetables, soup, rice and noodles.

We tried our hardest to devour every last morsel of the delectable dishes, but there was just too much on offer. The staff were more than happy to take our enormous amount of leftovers for themselves. 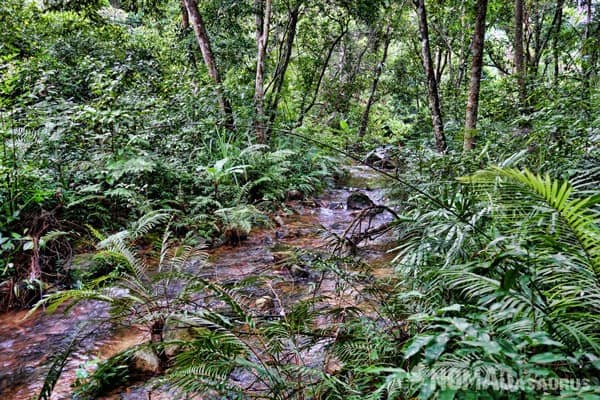 Our final stop was at the Semi-Wild Primate Rescue Enclosure. Opened in 2008, the 20 hectare nature reserve is used as a sanctuary for langurs in the transition phase between captivity and being released in the wild.

The fenced enclosure surrounds a limestone formation known as “Camel Hill”, and is monitored by employees from the Phong Nha-Ke Bang National Park.

At its inception, 6 female langurs and 2 males were introduced into the area and allowed to roam free. Two other wild male langurs surprisingly jumped the fence some years ago, adding to the numbers.

After some primates were released back into the jungle in 2012, there are now an estimated 16 or 17 langurs in the compound.

Unfortunately funding and training for this project has been shrinking, and Hai is unsure how the national park will operate the grounds in the future. Awareness and public interest will help shape how this eventuates.

Hai’s eco-conservation tour ends beneath the jagged mountains of Phong Nha, but his passion and information will continue to rise above them.

As more and more people take part in the tours and show an interest in environmental protection and conservation, the more the government and the national park will begin to increase funding and support.

With the likelihood of a cable car being built in the near future, it is more important than ever to be part of this positive movement.

With Hai accepting the challenge and providing enlightening tours, the chances will be in the environment’s favour.

How To Book Hai’s Eco Conservation Tour In Phong Nha

If you are interested in taking part in Hai’s Eco Conservation Tour as one of your things to do in Phong Nha, Vietnam, you can book it through the following places in town: 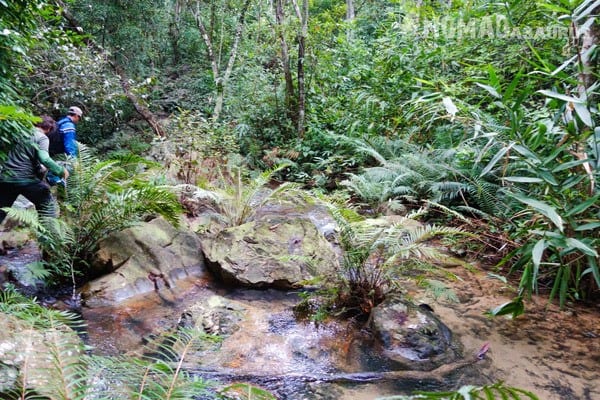 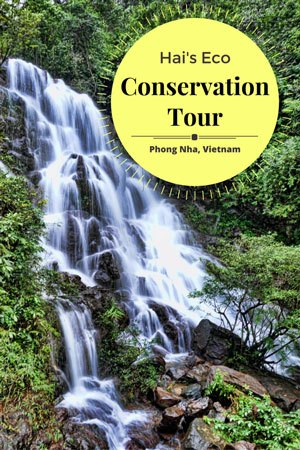