How To Visit Zhangjiajie National Forest Park (The Avatar Mountains)

The Avatar Mountains. That is how Zhangjiajie National Forest Park is being promoted across China and around the world.

Giant sandstone pinnacles rise skyward from the valley floor, some up to 200m tall with tufts of evergreen shrubs clinching to their narrow summits.

Thousands of these striking monoliths are eroded into the earth like a towering stone forest. Their powerful beauty is contrasted by its remote inaccessibility.

This is a place of awe and humility. Somewhere that one would think had never had human eyes laid upon them. It is easy to see the comparison between Zhangjiajie’s mountains and those of the mythical Pandora.

The unique geological formations that have formed over the aeons are almost unparalleled in their magnificence. It is little wonder that tourist development now sees the area attract millions of visitors every year.

Unfortunately this level of tourism has become unsustainable, and it is not just from becoming overcrowded or failure to implement beneficial resources.

Tragically, it is the type of people arriving that is ruining Zhangjiajie National Forest Park, and no one there seems to care.

China’s biggest visitor numbers in almost every location comes from domestic tourists. With a population of 1.4 billion people and a booming economy, more and more locals are in a position to travel and explore their own country, and abroad.

China has an unrivalled list of incredible and unique attractions that deserve both our attention and preservation. Many of us who travel are given an appreciation of nature and an education in why it is important to protect it.

Sadly this does not seem to be the case with China’s own tourists.

From the moment we had arrived in the town of Wulingyuan, on the edge of the Zhangjiajie National Forest Park, it was apparent that this was an immensely popular destination.

Huge hotels were being constructed on every street, trying to match the occupancy rates expected in the coming years. Dozens of enormous tour buses dropped off hordes of tourists, who haphazardly followed their guides around, directed by a flag and megaphone.

We ducked and weaved through the crowds to the new visitor’s centre, where we were relieved of 255RMB, the equivalent of US$40, for entry to the park. Quite a high price that we believed went into the conservation of the area.

We asked for a map and were instead directed to a large billboard. On this we noticed two cable cars and an elevator that were aimed at making the access to the park easier for those unable (or too lazy) to hike themselves.

Of course these were not included in our entry ticket and would cost more to use. They also failed to mention that the cable cars were not running at the time of our visit.

Zhangjiajie National Forest Park is different to many of the other national parks in China – the entry ticket actually lasts for four days (now only 3 days) instead of the typical one, and here bus transport is included in the price.

After our initial experience boarding one of these buses, we are glad we weren’t forced to pay more for the privilege. As soon as the doors opened, huge crowds of tourists surged forward, crushing each other and nearly trampling an elderly lady who was trying to disembark.

The level of care from the locals was non-existent. All they were concerned with was getting a seat, so that they didn’t have to stand for the 10-minute journey to the McDonald’s restaurant in the park.

Luckily for us, once we reached our first stop in Zhangjiajie National Park, the Golden Whip Brook, most of the crowds stayed on the bus, instead opting to take the elevator to the top.

The pleasant walk along the river’s edge was gorgeous. The sandstone and quartz monoliths peeked over the surrounding cliffs, standing tall like upright javelins. An unsigned path led up into the forest and we followed it enthusiastically.

After a steady and steep hour-long climb we reached the top, where our efforts were rewarded with some of the most spectacular views we have ever laid eyes on. High above the valley floor, we were near level with the pinnacles’ summits.

More than a few moments passed as we caught our breath from the steep ascent and marvelled at the astounding beauty all around us.

Unfortunately this is also where we rejoined the crowds. Shrill voices echoed across Zhangjiajie National Forest Park as group leaders squawked into megaphones.

Clusters of people in matching hats clapped and screamed in unison, trying to identify their own voice amongst the hundreds of other claps and screams bouncing off of the sandstone.

The illusion of being in Pandora was gone.

Foolishly we remained in Zhangjiajie National Forest Park until sunset, expecting to catch a bus to town afterwards. The lighting and views were impeccable, but we were shocked afterwards when we were told no buses would take us to the bottom.

Instead we were told to either stay on the mountain or take the elevator down. We protested, saying we didn’t have money for the overpriced elevator and that we would prefer to walk down. “No walking – only elevator,” was the only response.

Our options were to scrounge through our pockets to gather the 72RMB each for the two-minute elevator ride, or spend the night on the mountain. Busloads of staff headed down the mountain, but they would not allow us to join them.

Actually pointing and laughing at our protests, they watched as we reluctantly handed over our money to the ticket lady, and then sped off with spare seats to the bottom of the elevator.

Thanks, Zhangjiajie National Park. And for the record, the elevator sucked.

We refused to let the unexpected emptying of our wallets spoil the rest of our time in Zhangjiajie National Forest Park, and the next two days were far more secluded.

We stayed in the same area of the national park, but opted to do a lot more hiking on some of the quieter trails. As soon as you step away from the main paths, it feels like you have the entire park to yourself.

The park is massive and you could really utilise every one of the four days by venturing out to different sections. Unfortunately we began to feel one of the 7 curses of long-term travel, and started to get ‘templed out’, as it were, with the views.

The marvellous as the mountains are, there is so much of the same thing we could tolerate. We took a rest day before deciding to head on to Xian.

While Zhangjiajie National Forest Park left us with mixed emotions we are definitely glad we took the detour through Chengyang to check out the ‘Avatar Mountains’.

With the new glass bridge being installed in the coming months, we can only expect that tourist numbers will sky-rocket to an even higher, more unsustainable rate. Such is the way of nature’s best in China, though.

Visit Zhangjiajie National Park before it gets any worse.

How To Get To Zhangjiajie National Forest Park

The easiest way to get to Zhangjiajie National Forest Park is to fly. For those looking at travelling overland, the train to “Zhangjiajie City” ( 张家界 ) is the best option.

It is not a well-connected line in relation to most of the other major destinations in China, but with a couple of changes you can make your way there with minimal fuss. Check out C-Trip to figure out the best train schedule for you.

If you want to stay in Wulingyuan village ( 武陵源 ), you’ll need to take a bus out there. Once you arrive from the train station, exit the terminal and walk into the bus station on the left.

Walk to the back and show the staff the Chinese characters, or keep an eye out yourself. They will point you in the right direction. The bus should take about 40 minutes, and cost 12 RMB.

We did everything on our own, and despite the few issues this was easy enough to do.

However if you’re more interested in going on a private tour with an English-speaking guide, there’s a couple of options now.

It looks like the best one around that you can pre-book is on the massive tour booking platform Get Your Guide, and if we were to head back we’d consider doing their one-day trip.

When visiting Zhangjiajie National Forest Park, you have a couple of options. You can either stay in Zhangjiajie City, in Wulingyuan village, or inside the park itself.

The city didn’t really appeal to us, and the park seemed expensive (but does come with the added benefit of being able to see sunrise and sunset from inside), so we opted for Wulingyuan.

We found a great hotel, only a short walk from the entrance gate and the bus station in Wulingyuan. The Qing Man Hotel had only just opened up when we were there (May 2015), and it really was superb.

The owners, Richard and Sarah, speak great English and really went out of their way to make sure we had a wonderful stay. The rooms are comfortable, big and bright, the bathrooms were clean and the wifi worked great. Close to

Want to book at room at Qing Man Hotel? Book here with booking.com 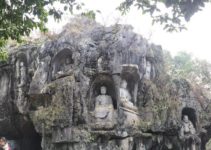 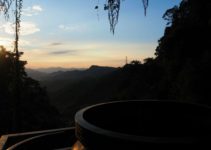 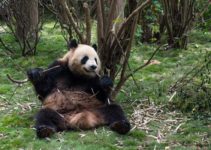