Everything you need to know about riding a motorbike around the Thakhek Loop in Central Alos.

For most travellers on the “Banana Pancake” trail, the terrain between Vang Vieng and Si Phan Don (the Four Thousand Islands) holds little of interest.

An absolute shame because many have no idea that the Thakhek Loop is one of the best things to do in Laos!

The typical backpacker crowd is usually looking for the debauchery of tubing on the Nam Song River, and the happy shakes of Don Det.

Typically only those with more time up their sleeve, or a thirst for adventure, tend to stop off at the villages and towns in Southern Laos. For the ones that do, many are rewarded with the Thakhek Loop.

Centrally located between Vientiane and Pakse, the somewhat industrial town of Thakhek is a logical stopover point to break up the long journey heading south.

Many find themselves here to tackle the Thakhek Loop, a 450km motorcycle journey that ventures into the mountains and farmlands on the outskirts of the city.

We took our motorcycle beasts on this adventure and it became one of the highlights of our 6 weeks in Laos.

Don’t ride motorbikes in Southeast Asia without travel insurance! Get your free quote on World Nomads, which you can purchase when you’re already travelling.

We arrived in Thakhek, meeting up with some friends who were also interested in riding the Thakhek Loop. After a quick chat to one of the friendly owners of a motorcycle rental shop in town, we were fully loaded with a small map and suggestions of a guesthouse or two to check out as well as some caves not to miss.

A once-over on our bikes to make sure they were in working order, which is one of tips for renting a scooter in Southeast Asia..

Here is the itinerary we followed for our adventure on the Thakhek Loop, including where we stayed and what we did.

Early the next morning, we set off on the Thakhek Loop. It was a special day, because Lesh was celebrating her 30th birthday. Quite a milestone.

Barely 5km out of town we were greeted with stunning limestone cliffs and green pastures. The road was in good condition and we broke up the ride with numerous stops for pictures.

Our first stop was Tham Ene, one of the caves recommended to us on the Thakhek Loop. After a quick discussion, we decided to go “all-out” and pay for the boat tour through the cave, as opposed to the simple walk. It was worth every penny!

Tham Nang Ene is a 1km long cavern that has a stream running through it. With our affable Lao guides, we boarded two small, plastic boats and set off into the darkness.

The limestone formations inside the cave were stunning. Our guides sang songs and paddled around the obstacles blocking our way, until we reached a point where we were out of options – we had to carry the boat over some rocks.

So we lifted, and dragged, and heaved, and hoed until we could push the boat back into the water. Then continued on our merry way to the other end of the cave.

We reached the mouth, then clambered to the top, stopping to drink some “fresh” cave water along the way. Stomach bugs be damned, we quenched our thirst then headed back for the return journey.

With cave number one out of the way, we made good timing in arriving at the village of Thalang, where we checked into the Phosy Thalang Guesthouse, with our own personal bungalow on the river.

Well, not quite a river so much as a small body of stagnant liquid. But waterfront is what we will call it and it was peaceful.

The night crept on and we did our best to consume every drop of Beerlao in the fridge. When we had accomplished this, there was nothing else to do except pass out, with the sounds of torrential downpour to be our sleeping soundtrack.

2019 Update – The muddy part of the road has been resurfaced and the whole way from Thakhek to Klongor Caves is really easy to ride on an automatic scooter – such a great trip. Thank you Aoife

Day two began groggily, and we awoke to discover the rain had not let up. We had breakfast and discussed whether we should continue on, despite the bad weather. We knew that somewhere along the route, the road would turn into gravel, and from that into roadworks.

We weren’t sure how bad of a condition our path would be, but that didn’t matter. Crappy weather? Dodgy roads? Unsuitable bikes? Now that sounds like an adventure! Quick, pack our stuff and let’s get back on the Thakhek Loop!

Not even shouting distance from our guesthouse, the road changed to gravel. The pace slowed down, and we kept our concentration on high alert to avoid the imposing potholes.

We climbed altitude and the road briefly became paved again, luring us into a false sense of security. Rounding a corner, that security was vanquished as the road narrowed dramatically and the surface turned to dirt and mud.

We dodged our way through what we assumed was the worst of it, heading through a small village and then climbing a steep hill.

Only then were our nightmares realised when the road before us became a descending shitfight of deep mud, puddles and sharp corners.

For 500m or so we negotiated this mass of quicksand, witnessing even four-wheel-drives become stuck in the slush.

An hour and a half passed by before we finally made it onto sturdier terrain and we celebrated, despite our filthy clothes (and in my case, slightly-damaged motorcycle from the two times I dropped it).

The rest of the ride was uneventful in comparison, and we arrived in the village of Khong Lor just in time for sunset beers by the (actual) river.

The reason for us spending the night in Khong Lor was so we could check out the cave of the same name. The same river that we enjoyed beers by the night before flowed through the cave for 7km.

Here, you could take a motorised boat down the entire length of the underground chamber, through caverns that rose up 50m above your head in huge, cathedral-like halls.

Sections were lit up, but for the most part the only vision you could enjoy came from the illumination of our supplied headlamps.

Massive stalactites, stalagmites, columns and pillars were seen everywhere and the ride took us over an hour to reach the other entrance.

A small village is located at the far end of the cave, the river forming their only means of access. After an all-too-brief stopover, we started the cruise back to the beginning.

We did not want the trip to end, so we managed to convince our boat driver to stop off at one of the sandy banks inside the cave so we could go for a quick swim.

Treading water 3km deep inside a cave in almost absolute darkness was a surreal experience – one that we will not forget in a hurry.

The entire trip took us over three hours, and we were left with the 200km ride back to the town of Thakhek. Not really a problem in normal circumstances.

However as soon as we left the town of Khong Lor at around midday, it began to rain quite heavily. So heavy that we had to stop in a friendly local’s shed and wait out the storm. This took over an hour and the slippery roads made for slow riding on the last part of the Thakhek Loop.

Climbing through more windy roads we could only imagine how picturesque the scenery must be, were we not completely engulfed in clouds.

Joining the highway, we contemplated stopping for lunch, but with more ominous storm clouds creeping up in the distance, we decided to give it full throttle back to our original starting point.

Before darkness fell on us, we were checked in to a guesthouse and were showered and dressed in dry clothes.

Laos is such a beautiful country, with so many back roads and villages to explore. We couldn’t imagine not taking the time to complete the Thakhek Loop.

The good friends we enjoyed the adventure with added to the excitement felt during our three days and 450km. Sitting back in Thakhek drinking a cold beer and laughing about the treacherous road we survived, the rain we managed shower in, and the sensational caves we explored felt as though we had earned every chuckle.

Many people lack the time or desire to investigate this small town and its infamous motorcycle loop. It is such a shame. Don’t be one of the people who misses out on this epic journey!

Where To Stay On The Thakhek Loop

There are a few different places to stay on the Thakhek Loop, but these are the ones we chose and what we recommend.

Ask them about their river tour. It costs 500,000 kip for a boat trip that can take up to 6 people. The tour goes deep into the jungle to see ethnic villages and remote swimming holes.

Organise your accommodation on Booking.com before you leave Thakhek in high season.

Price Of Things To Do On The Thakhek Loop

Kong Lor Cave
At the main gate;
Entry to the grounds: 2,000k each person
Motorbike parking:  3,000k per bike

[box] That’s it for our guide on how to ride the Thakhek Loop in Central Laos. Let us know what you think of this epic trip when you complete it in the comments below![/box] 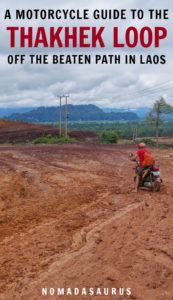 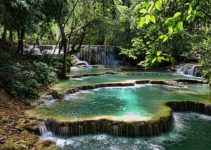 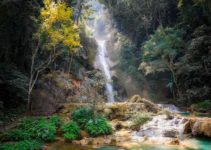 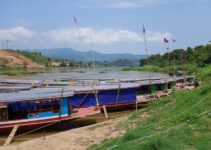