Riding Camels And Climbing Sand Dunes In The Gobi Desert 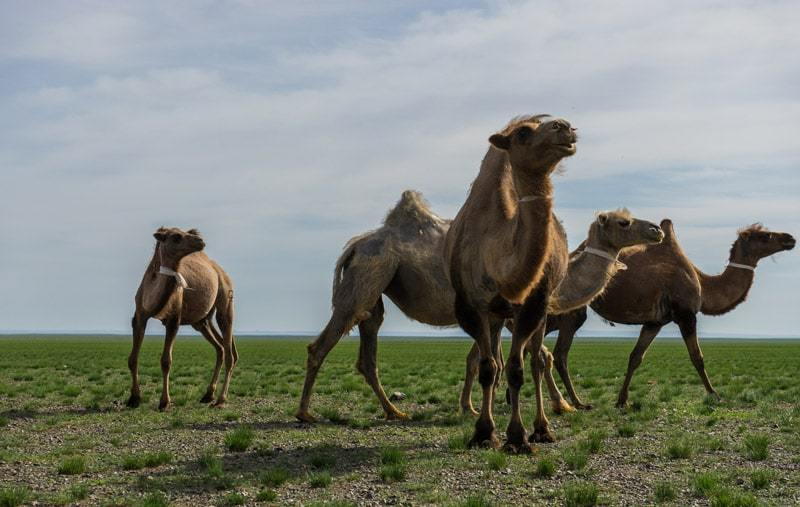 The badlands of the Gobi are vast, overwhelming and utterly magnificent. A region that challenges everything you thought you knew about Mongolia. The kind of place that makes you contemplate the elegant beauty in each crevice of earth, no matter how barren or daunting it is. Dinosaur fossils scatter the landscape and nomadic families migrate in serene existence with the seasons. Wild camels roam freely. Oases spring periodically in the most unassuming locations. In other words, it is the kind of place we were desperate to visit.

If we were to sit down and write a list of all the ‘must-dos’ in Mongolia, riding a camel in the Gobi Desert would be right at the top. What else could be more stereotypical of an image than being perched between two humps as your bactrian camel strides along the base of a towering sand dune. Naturally, when we decided to visit Mongolia on our way across Asia, camel riding became a goal of ours that would dominate every waking moment until we conquered it.

Stretching for a massive 1.3 million square kilometres across Mongolia and China, the Gobi is the 5th largest desert in the world. Defying what we thought a desert of this magnitude would look like however, when we travelled through the region on our Gobi Desert, Karakorum And Beyond Tour with Selena Travel, the area was speckled with emerald green against a vivid sun. Recent rainfall had made what our guide Joe dubbed “The Green Gobi”. And damn was it beautiful!

Another long yet captivating drive had landed us in the Gobi Erdene Tourist Ger Camp, and we enjoyed a few hours of relaxation after lunch. Located near the base of the Khongor Els sand dunes – the largest one in the entire country – the camp was one of the most luxurious accommodations we would stay in during our whole tour. If it wasn’t for the upcoming adventure, it would have been all too easy to just kick back with a cold beer and soak up the views for the entire evening.

Jumping into the vans for the hour long drive to the camel herder’s camp, Joe told us that we were going to wait until later in the day to fulfil our ultimate Mongolian fantasy. First we were going to tackle Khongor Els. As we neared the foot of the colossal dunes, we finally had a chance to appreciate just how large they really are. Running for 180km along the base of the Gobi-Altai Mountains, and in parts reaching 800m high, they are an awesomely imposing sight.

Our group set off and tried our best to keep a steady pace as we ascended the enveloping monster. The intense heat bounced off the sand and sweat poured from our brow. A growing wind whistled around us, demonstrating why the Khongor Els are also known as the ‘singing dunes’. The peak we were aiming for was only 300m tall, but it never seemed to get any closer. One by one, members of our group dropped off, giving up at the immense challenge of reaching the summit. Ever determined, Lesh and I pushed on.

I passed Joe while he stopped to check on the other climbers and hit the steepest section of the dune. Each step forward resulted in two steps back as the desert gave way under my weight. At this height the wind was now whipping sand into my face in furious fashion, and my efforts seemed more and more futile. Zigging, zagging and ignoring my frustration, I finally managed to create a rewarding path and zeroed in on the peak. An hour after we had set off, I triumphantly stood on the top of Khongor Els. I screamed out in jubilation, but the sound was drowned out by the gale.

Joe followed soon after, and we embraced at the top. Lesh was not far behind us, and she scrambled her way to the top like a true champion. As expected, the views were more than worth the effort. In front of us the grassy lowlands sprawled towards the distant horizon, glowing under the mid-afternoon sun. Behind us the hidden backside of the dunes rolled and tumbled into the foot of the Gobi-Altai Mountains. In a word: sensational.

Shortly Paul and Mary, the only other members of our tour to doggedly persevere, reached the summit with us. High 5s were slapped, hugs were given and we posed for a celebratory selfie.

The day did not end with our ascent though. It was now time to head back for our much-anticipated camel ride, and Lesh and I raced to the bottom of the sand dunes. Leaping and jumping the whole way down, we made it to the bottom in less than two minutes. If only the climb had been so easy.

We joined the rest of our team and exhaustedly slumped into the vans for the short ride to the herder’s camp. Our excitement levels were soaring as we pulled over and met our latest and greatest modes of transport: The iconic two-humped camel. 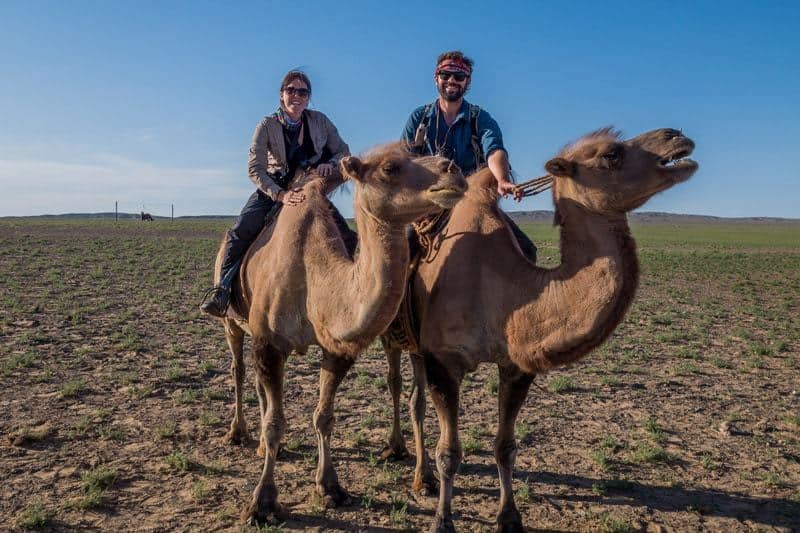 If you have never seen a camel up close before, let us fill you in on a little secret. They smell unlike anything you have ever smelt before, and aren’t as cute as you would think. But don’t let that ruin your expectations – they are still awesome. One by one, the guides coerced the camels to lay down and carefully helped our group hop into the saddles. A few minutes later, and we tramped out of the camp. For the next two hours we crept along, soaking up every second of the journey.

It was one of those pinch-yourself moments. I looked at Lesh and we started laughing. To the left of us, the Khongor Els sand dunes loomed overhead. Less than an hour before we had been standing on its summit. To the right of us was the vast expanse of exquisite nothingness that is the Gobi Desert. And here we were, cruising beneath a dizzying blue sky, perched between the two humps of a Mongolian bactrian camel. We don’t have a bucket list, but if we did, there would now be one less thing to do on it.

[box type=”info” size=”large” style=”rounded” border=”full”]Our Gobi Desert tour and the experiences during it were made possible with the support of Selena Travel. All thoughts and opinions are, of course, our own.[/box] 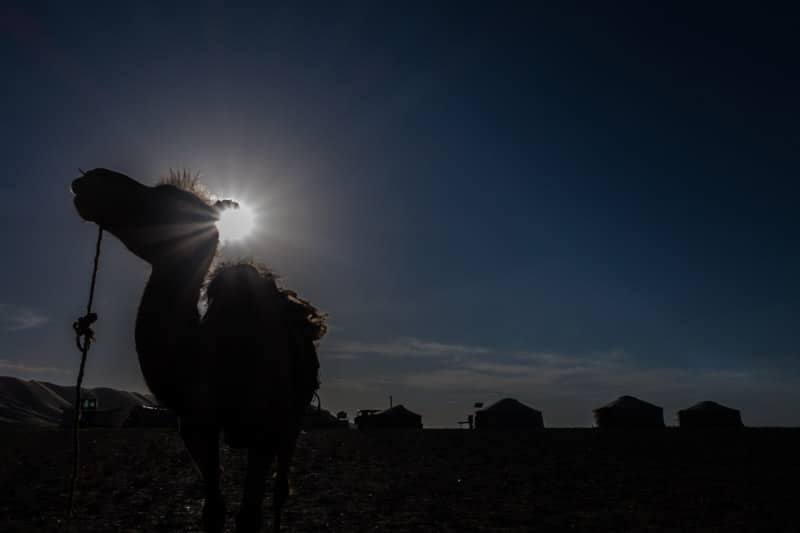