There is no Thai experience more enjoyable and spiritual than celebrating Songkran in Bangkok. 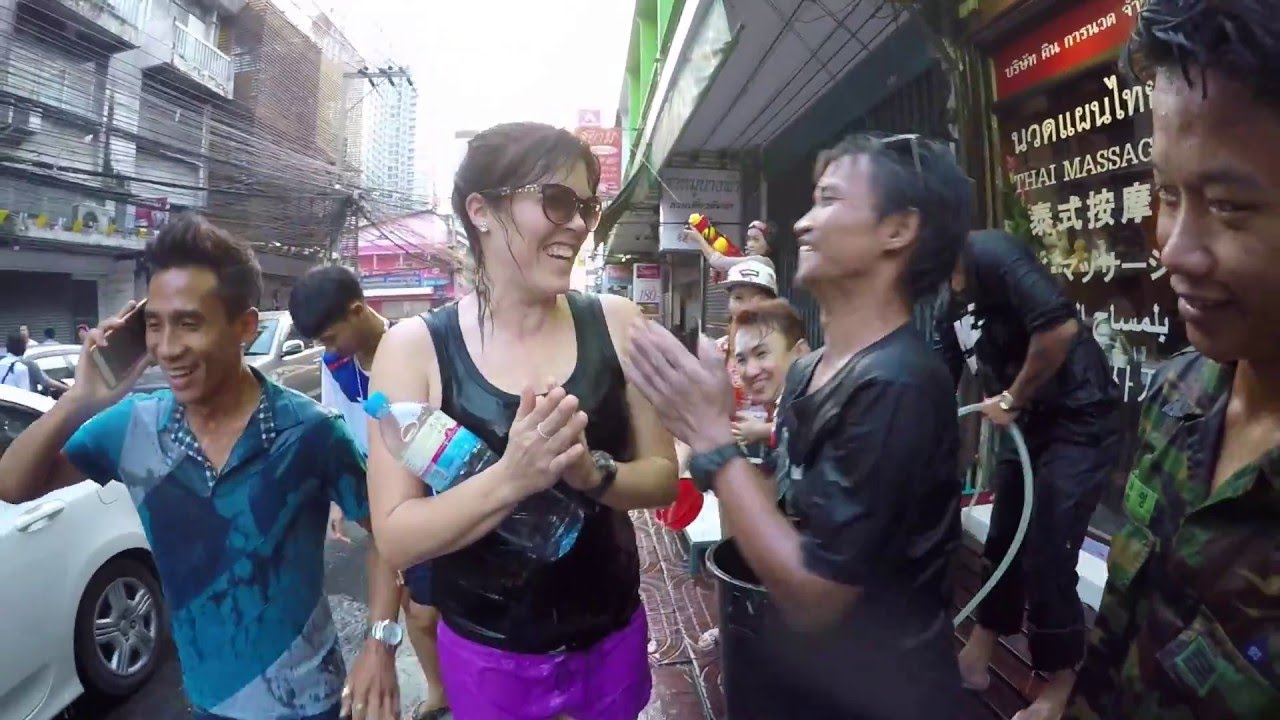 There’s no bigger celebration in the Thai calendar than the Buddhist New Year. Songkran is far and above the most happening, fun, intense, spiritual and beautiful party that can be hard in the country.

Known universally as the “world’s biggest water fight”, It’s something that is revered by all who get a chance to catch the festivities.

Having already celebrated the Burmese version of Thingyan in Mandalay, we were very excited to find out we were going to be able to experience Songkran in Bangkok this year.

Songkran is traditionally a three-day celebration that begins with the official new year on April 13th. The festivities continue until the 15th, but it is not uncommon to see some parties going for up to a week at a time.

We arrived in Thailand to catch the last day of Songkran in Bangkok, and were stoked we got it.

The act of pouring water over each other symbolises the washing away of sins from the previous year. It is a strong and powerful gesture, and something the Thai people consider sacred.

While in recent times it has seen a huge trend growing for local men and women to get intensely intoxicated, the heart and soul of Songkran is still there. No matter what happens, it will always be a beautiful celebration.

We have to admit something – we have seen photos and videos of Songkran in Thailand and were a bit hesitant to experience it in a major tourist destination.

The images we had seen of Songkran in the Southern Islands, Bangkok, Chiang Mai and other busy spots seemed to be predominantly drunken foreigners, running around in bikinis and board shorts showing no respect for this important religions holiday.

After Thingyan in Myanmar, where we saw less than a dozen foreigners in a crowd of 150’000 Burmese in four days, we didn’t really want to be part of a farang-filled party.

Maybe we were being those typical “stay away from tourists” type of tourists…But it never appealed to us. The idea of taking over a local holiday to get drunk with a bunch of travellers made us hesitant of celebrating Songkran.

Nevertheless, we got off the plane in Bangkok and took the metro to the Huai Khwang neighbourhood. We were booked to stay at the fabulous Yim Huai Khwang Hostel, which is located away from the foreigner melting pots of Khao San Road, Silom and Siam.

Besides meaning all the food in the area was super cheap, it also meant that the streets had hardly any tourists on them. We hate to jump into the whole “traveller vs tourist” debate, but this was perfect for us. 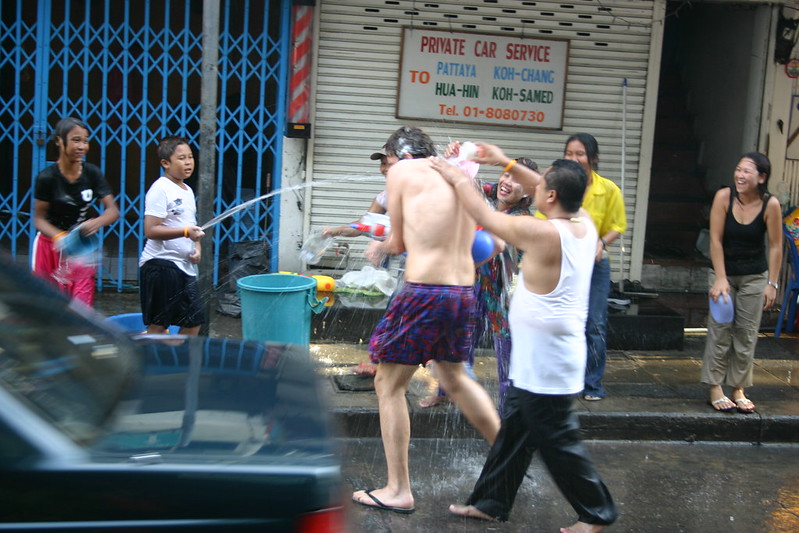 We tried to sneak to the hostel without getting wet, but even in the 500m or so we had to walk it was impossible. Young kids came running up to us with water bottles in hand.

Our cries of protest meant nothing. Despite wearing everything we own on our backs, including camera and electronic equipment, the kids innocently poured water over our bodies.

There was no use being upset. This is Songkran and it is their celebration. We laughed and wished them a happy new year, before rushing to the hostel to drop our things off.

Once we had safely stowed our gear in our room, we ran out into the streets to see what get caught up in the celebrations of Songkran in Bangkok.

The roads were beginning to flood and within moments of stepping outside Yim Huai Khwang Hostel, we were saturated.

We walked up and down the streets, soaking up the joyous atmosphere and having our sins washed away by hundreds of Thai people. Kids spotted us from miles away and came running water pistols at the ready.

Every few minutes we came across a group of friends or family with a large bucket of water, fending off their territory. No one was safe from the onslaught – police vehicles, moto taxis, kids and adults, everyone was fair game.

For over two hours we cheered and yelled with the locals, and didn’t come across a single tourist. It was hard to believe we were in the middle of Bangkok at the most important religious festival of the year, and being the only foreigners.

We managed to get some quick breaks in to buy fresh coconuts and fruit smoothies, and surprisingly once we were seated and drinking, people courteously avoided us. Unlike in Myanmar, where there was no chance of escape anywhere, here we could enjoy a mango shake and keep dry as well.

Eventually it began to get dark and the streets began to empty. Being the last day of Songkran there were huge parties to be had in Siam and on Khao San Road. Suffering from jetlag, and wanting to avoid 30’000 drunk foreigners puking on the streets, we decided to have a few quiet drinks in the hostel instead.

Celebrating Songkran in Bangkok was one of our most enjoyable cultural experiences, even if we only caught it for a few hours. And being out in the Huai Khwang neighbourhood allowed us to get a proper authentic touch to the party.

With the sins of the previous year now washed away, we were ready to move into the new one with zest and gusto. And with everyone in the happiest moods imaginable, we were well on the path to having a damn good year.

Looking for accommodation in Bangkok? Book here with Agoda.com

1 thought on “Celebrating Songkran In Bangkok”