Iguazu Falls – A New Natural Wonder Of The World 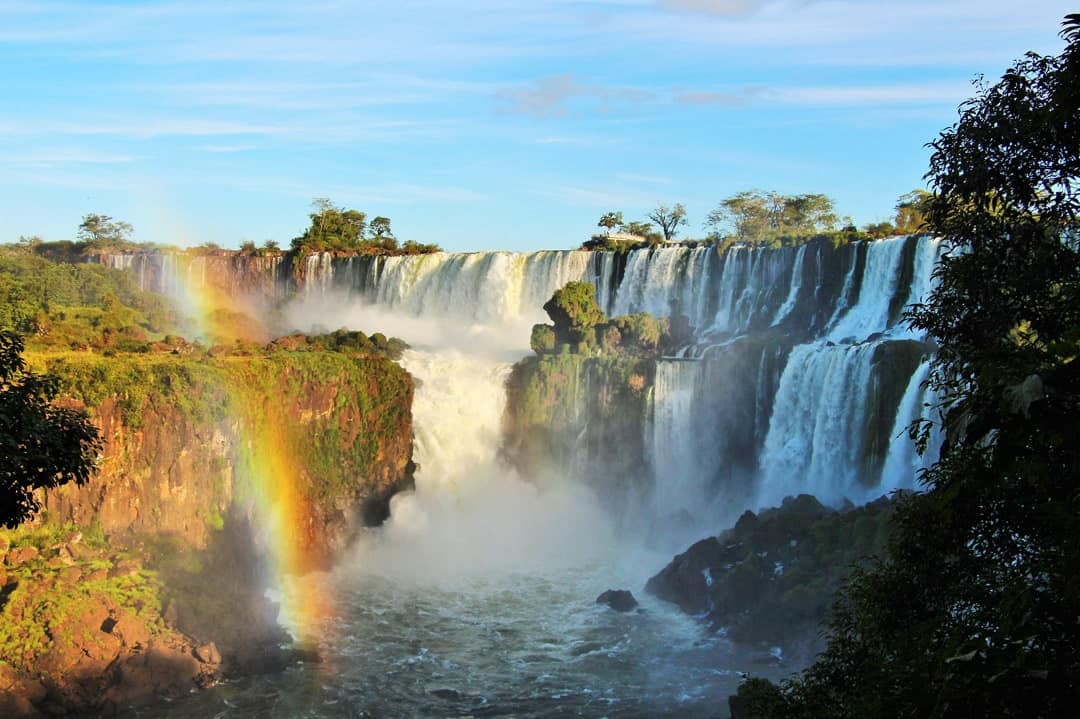 After a couple of weeks living in the mega city of Buenos Aires myself and my travel buddies Liran, Dan and Geariod decided that it was time to get out and see some of the nature Argentina has to offer.

Arguably the most incredible natural sights you can visit in Argentina are Iguazu falls along with Patagonia. The falls are actually located on the border of Argentina and Brazil with 80% being on the Argentina side. It’s possible to visit from both countries and it’s best to leave a day to do each side.

Recently voted one of the new natural wonders of the world, Iguazu falls is a place you have to visit to be able to comprehend the scale of the place. 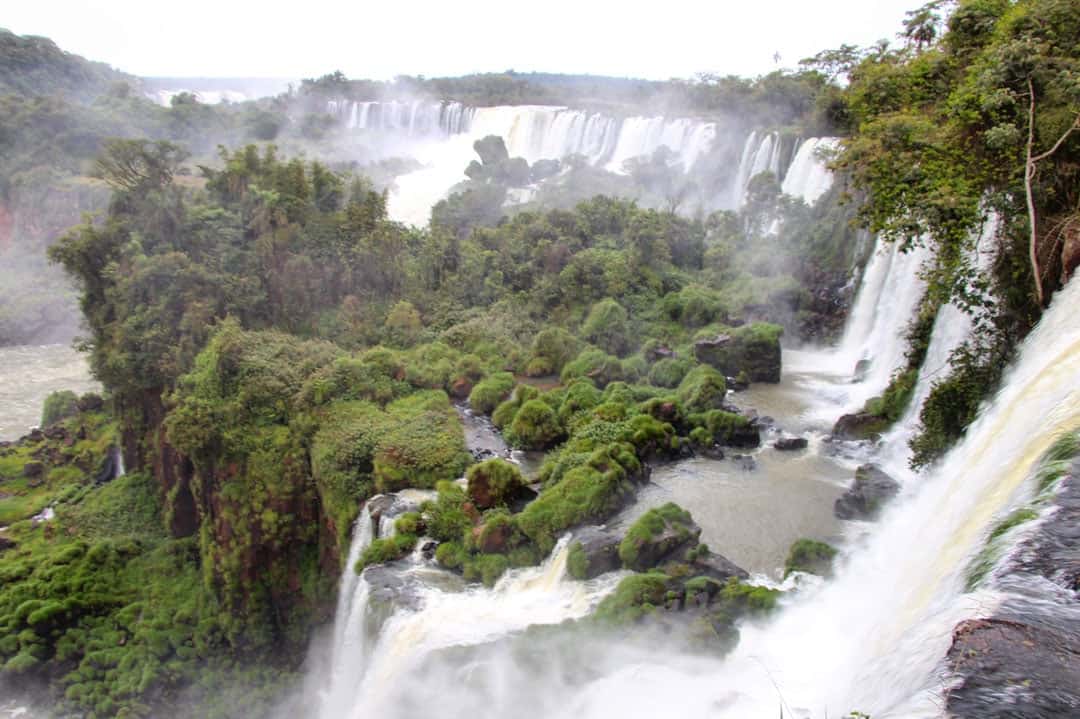 The first sighting by Spanish Conquistadors was in 1541 but the local Guarani people have regarded the site at sacred for much longer than that. Since that first sighting by Westerners the falls have become a must-see for anyone doing the circuit of South America.

The numbers are pretty staggering. The falls cascade over an 80m basalt escarpment for 2.7 kilometres and depending on the season there can be anywhere between 150-300 (normally 275) individual falls.

To put that into perspective, the falls are longer than both Niagara and Victoria Falls.

Luckily they are really easy to visit with both countries having international airports and bus connections from a lot of places North and South. Being in Buenos Aires we had the choice of either a 24 hour bus or a roughly 90 minute flight from the city’s domestic airport. Busses are more expensive than you’d expect so we weighed up the time/money and decided to go with the flight. 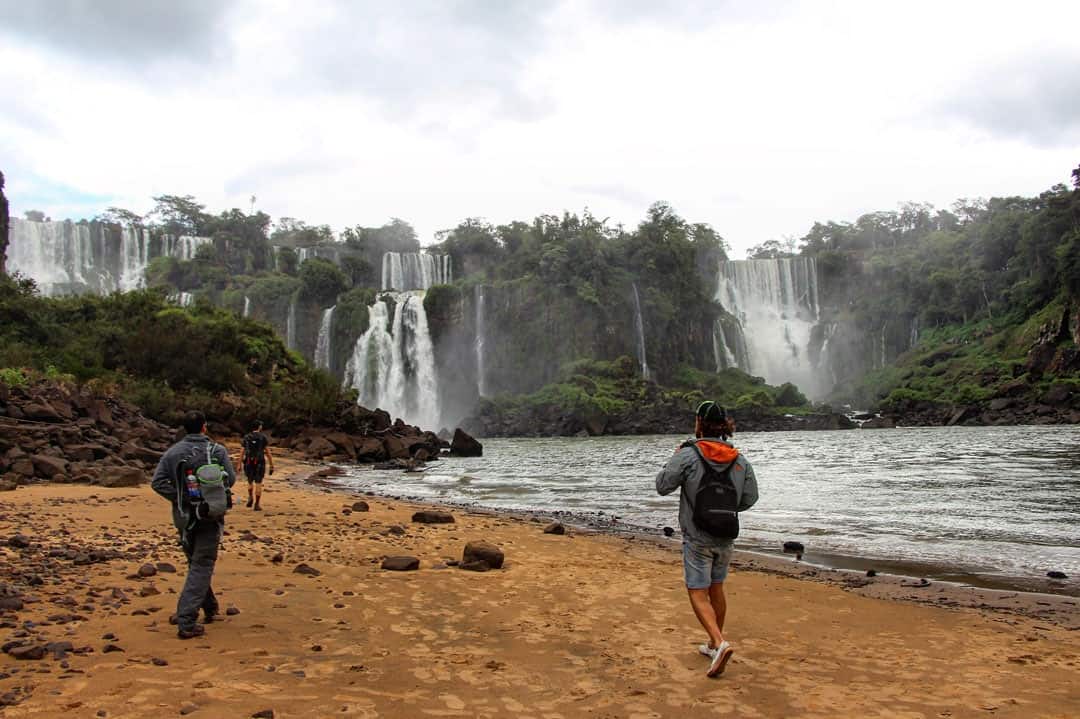 The nearest town to the falls on the Argentina side is Puerto Iguazu and is probably the most convenient to use to visit both sides. The town has a lot of hostels, hotels, restaurants and supermarkets so you don’t really need to buy anything before arriving.

If you don’t have much time to see the falls it’s probably a good idea to spend all of your time on the Argentina side. It has great walkways over the river to the best viewpoints and a network of paths through the jungle to other smaller, but still pretty epic, waterfalls in the forest. For anyone unable to walk very far they also have a miniature train which can cut out the long distances.

On arriving at the National Park there is the usual ticket booth and entrance area followed by a small village of food, drink and souvenir shops. Once inside you have the option to walk around 6 different trails leading to different attractions and viewpoints within the park.

Looking for accomodation in Puerto Iguazu? Check out booking.com 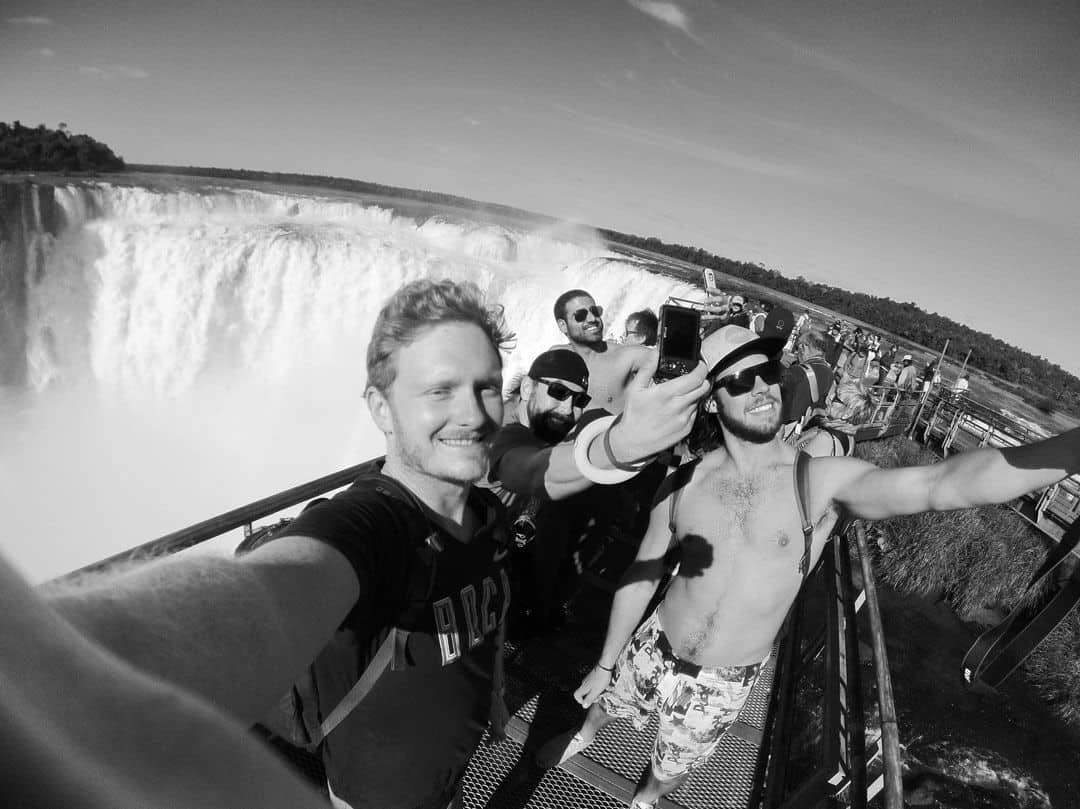 Unless you are a fast walker it’s probably best to stick to the main 4 paths which are above and below the falls. None of us could decide which of the paths was the best, as they all have incredible viewpoints.

The best 4 to cover are the Lower Circuit, San Martin Island, Upper Circuit and the Garganta Trail. Both the Lower and Upper circuit cover are great paths which go through the jungle and over dozens of separate rivers and waterfalls. They then emerge at incredible viewing platforms which overlook the main falls.

At the end of the Lower Circuit you can take a side path which leads to a small pier. From this pier there are boats which then go across the river to San Martin Island. From the island there is a lookout area which is so close to Salto San Martin (big falls) that you’re likely to get completely soaked again.

Finally is the most spectacular trail of the park, the Garganta Trail. After taking the passenger train to the end of the line you begin the walkway which is completely built over the river to the Garganta Del Diablo (throat of the Devil). This is when the scale of the river really becomes apparent.

The trail goes over the river and some islands for over 1 kilometre before finally reaching the falls. On the way it’s possible to see catfish over 1 metre long chilling below the bridges and the twisted remains of the last path that was destroyed in floods. 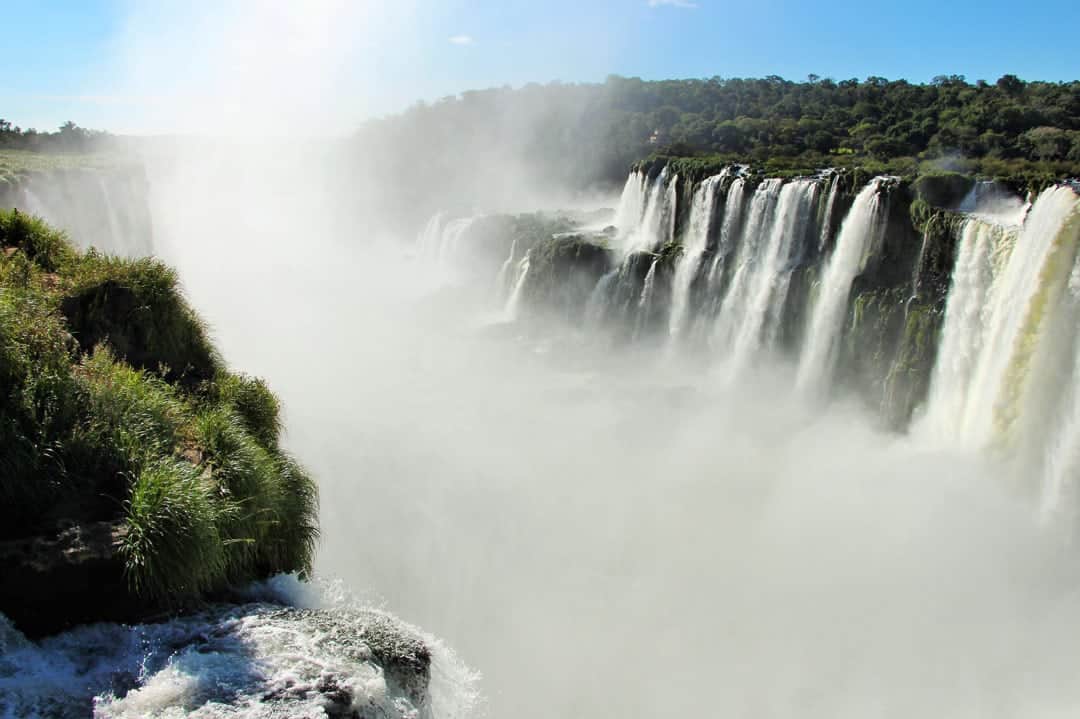 As you get to the lookout over the falls most people just kind of stand there stunned with complete sensory overload. The water falls 80 meters into a chasm with a sound that is louder than a plane a full throttle. It’s up there in the top 10 most incredible things I’ve seen in my life and I can only imagine how insane it must be in the wet season.

If you don’t mind getting soaked there is also an extra option of taking a power boat into the bottom of the falls at the end of the lower walking circuit. It does cost extra but it was probably the highlight of our day.

For around 10-15 minutes you get speed-boated around the bottom side of the falls, sometimes getting so close to the biggest cascades that the whole front half of the boat disappears. There won’t be a part of you that’s dry afterwards so a change of clothes is really recommended.

Along with the obvious waterfalls the area is thriving with jungle life. You will probably see more butterflies than the rest of your life combined, monkeys, birds, insects and reptiles just to cover the main groups. So if there is spare time at the end of the day it’s well worth finding a seat in the jungle and just trying to spot something. You might even see a Puma.

The falls are a bit of a mission to get to, I was even going to give them a miss myself. After going there I can vouch for the fact they are so spectacular that no trip through Brazil, Argentina or South America would be complete without seeing them.

Want to visit Iguazu Fall with a guide? Book your tour here with Get Your Guide. 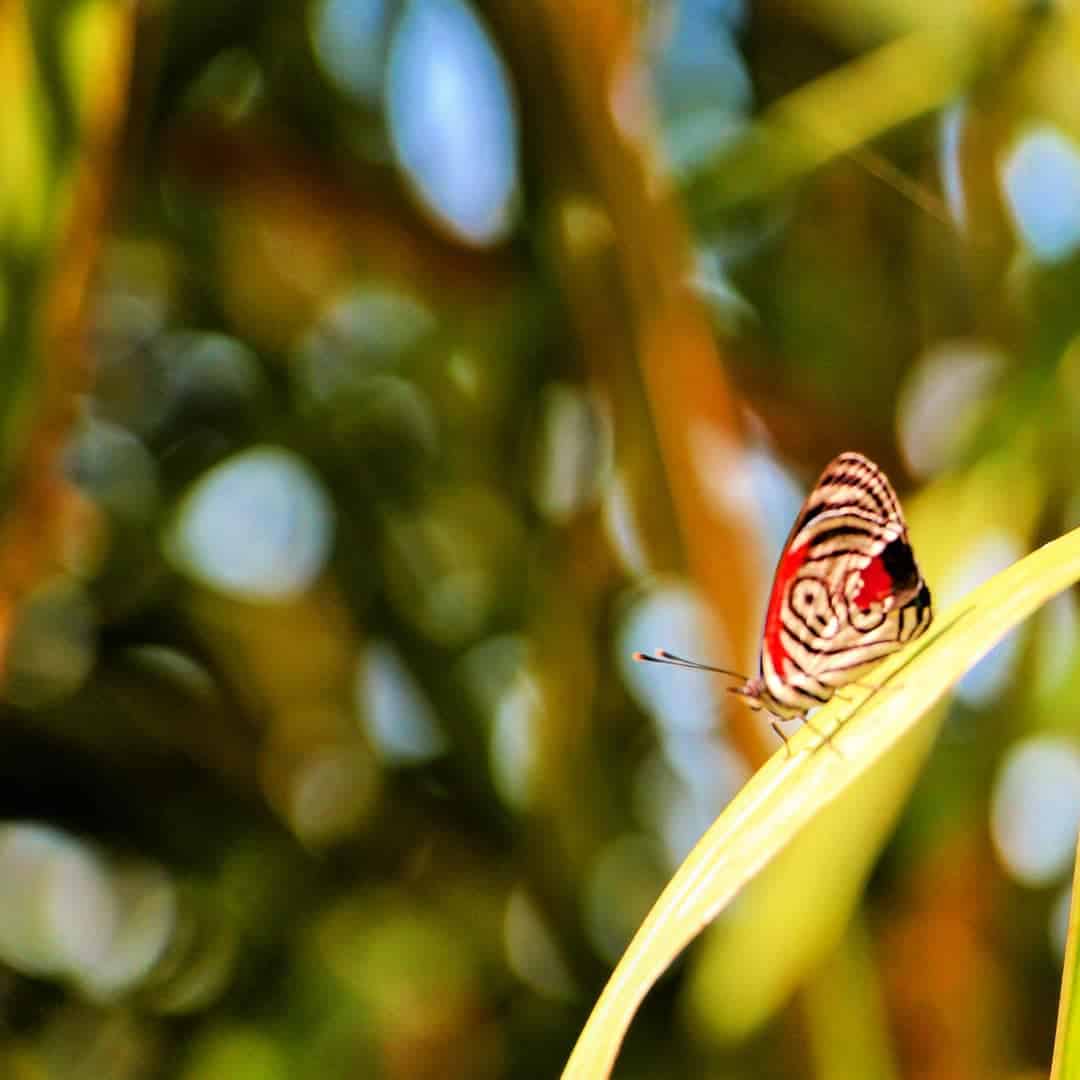 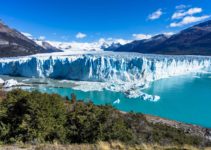 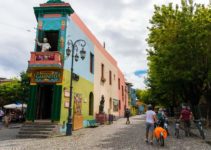