When I think about the melodic ‘Trains and boats and planes’ my favoured forms of transport are the trains and boats. Taking that thought further and continuing the plurals, buses and coaches just don’t fit into the monosyllabic rhythm but cars do, so I’ll add road trips into the equation too.

This little snippet is actually more about trains but I’ll slip in a car aside.

Whenever possible I travel by train, and last year, although time was often of the essence and flights were sometimes essential, I fitted in as many train trips in Europe as possible. Trains have many positives to them (in first class of course, definitely worth paying that extra bit of money). There is more space than on a bus so mostly you are not jabbing your neighbor in the ribs or being jabbed, sometimes there is food on board (but always take your own), you can charge your phones and computers and walk around to your heart’s delight and if you book the right ticket a table for your food and computer (or playing cards as my sons did from Bari to Naples). Of course there is also the dreaming time as you watch the scenery roll by, which you can’t really do in a plane. However, I will never again travel 2nd class on a train after my Milan to Venice experience back in 2006, standing up most of the way in what felt like an over-stuffed cattle truck with the candy trolley running over our toes if we didn’t shuffle away from it’s onslaught in time. That guy was going to get through no matter what.

There are some negatives of train travel for a ‘senior’ solo traveller. Definitely worth mentioning are the steps up to the train. Often there is a gap plus a couple of steps to the narrow carriage entrance. So make sure you are able to handle your own luggage as there isn’t anyone to help. I was lucky and found some very helpful fellow travellers along the way. Oh, yes, speaking of helpful people, sometimes these people are actually gypsies who wait on the train and who will take your luggage on board then expect payment before they get off the train before being caught by the guards, I didn’t mind that as long as they didn’t run off with the luggage. It all added to the learning experience and didn’t cost much to be helped. I would never allow them to help taking the luggage off the train however, that’s when you risk losing your stuff.

Last year my train trips included crossing Italy several times, from Ancona to Bari, Bari to Naples, from Venice to Pisa and then from Pisa down to Rome, I love Italian long distance trains and having the time to watch the countryside roll by. Another was Sweden (Uppsala) to Denmark (Copenhagen), Swedish trains are the ultimate for train travel and the quietest trains I have ever experienced. In fact so quiet that unless I looked out of the window I wasn’t sure whether we were actually moving at all, I thoroughly enjoyed that trip.

I also caught the train from Vienna to Dresden. Normally that would be a pretty journey but I travelled during the horrific European floods of 2013. Village after village under water. The devastation was on a grand scale. I was lucky to get through as the water had only dropped away from the railway line the previous day. I arrived in a flooded Dresden where many places along the Elbe riverbank were also under several metres of water and sandbags were everywhere, keeping the river out of the centre of Dresden. It took a week before the water started dropping.

However, my favourite train trips last year were the ones to and from Ljubljana (Slovenia). My son (Ginski) and I left Belgrade to travel to Ljubljana via Zagreb. A word of warning, for some reason you can’t buy a ticket from Belgrade through to Ljubljana, you actually have to get off the train in Zagreb and buy the ticket for the next leg. It would have been difficult had I been on my own as there is only half an hour between the train arriving and leaving (yes, surprisingly it was the same train, which we weren’t told). If I do that trip again I will factor in a stop-over in Zagreb.

The scenery along the way certainly kept my attention, especially once we got to the Slovenian border. We travelled along the Sava River through beautiful green hills and forests, the water of the river running along and splashing over rocks. I could almost hear the calming sounds of the gurgling waters. I pretty much fell in love with Slovenia right there and then, such beautiful scenery.

As time was limited and my main goal was to find a Slovenian castle which was once a Russian émigré school where my mother spent a year of her childhood, we hired a car and off we went. This is the little car aside story. I won’t drive on the ‘other’ side of the road so I was so lucky I still had Ginski with me. We found the castle, took heaps of photos and moved on to Lake Bled. On our last day there we decided to head up to Lake Bohinj (25 kms away), halfway there it started to snow. It snowed and snowed creating the most beautiful Christmas card scenes on the 24th of May 2013, I’ll never forget that day at Lake Bohinj, it was such a stunning and unexpected event. The guys back at the hotel didn’t believe us until we showed them the photos.

A week later I was leaving Ljubljana travelling to Vienna, this time on my own as Ginski had to leave a few days earlier. At first the scenery was quite normal, pretty and green of course but not spectacular (by now I’d been spoiled by the scenery of Lakes Bled and Bohinj) and then, there it was! That view out of the train window as we crossed into Austria. The villages tucked into the folds of the hills or placed wherever there was some flat farming land, the red roofs contrasting the bare escarpments and the many shades of green trees. The white of the snow on the peaks in the distance accentuated by the green of the forests in the foothills. It was a journey through a postcard, stunningly beautiful and vibrant. I was sad when it was all left behind as the wheels clattered on to Vienna, but then there was the beauty of that city to see. Ah, travel! So much to see, so much to do and whenever I can I will continue to travel overland, Europe by train. 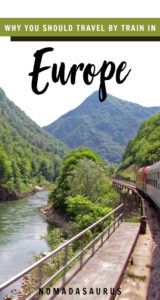 About the Author - Helene Jermolajew

Essentially I am a poet, I started composing poetry way back in childhood mainly as a hobby. In 2006 I travelled to Europe for the first time on a 6 week trip which whetted my appetite even more, that was followed by two trips to S E Asia and last year, 2013 at the age of 62, I decided to leave Australia for 12 months. The plan was to track down my Mother’s school buildings and places where she and Dad had lived in order to be able to add more information to her memoirs and have them re-published. After that there were no real plans except to go wherever the winds took me. Read more on my blog.