Latvia’s Karosta Beach – The Most Hauntingly Beautiful Beach in Europe

For lovers of Soviet relics and abandoned monuments, don’t miss a trip to Karosta Beach in Latvia. 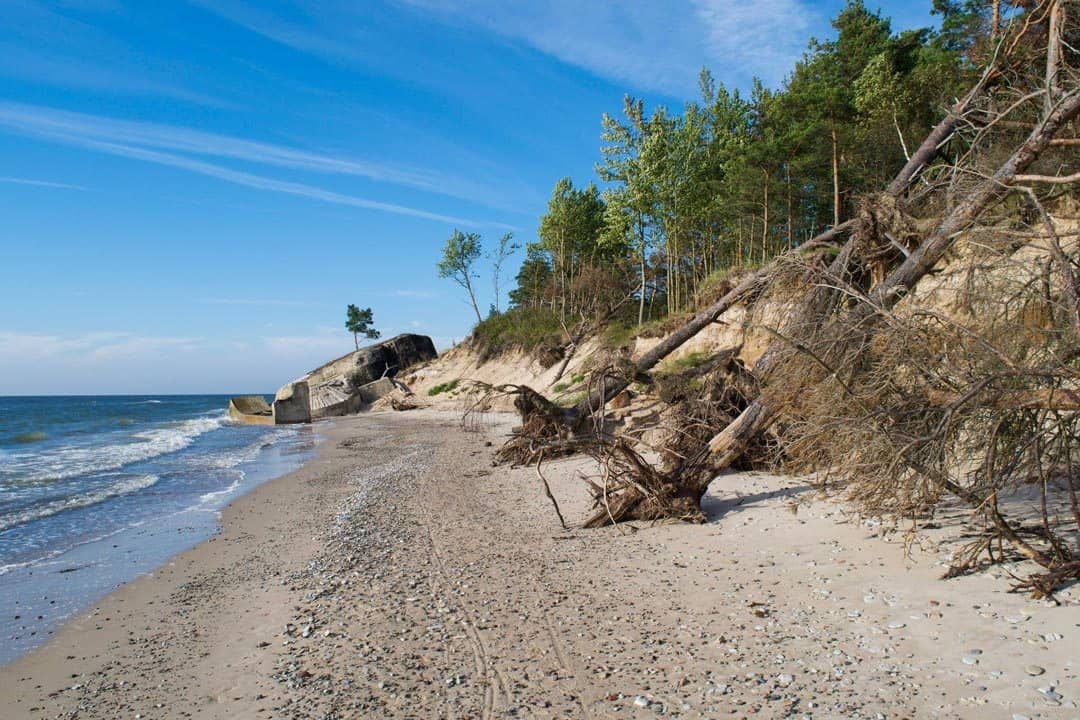 When you think of Europe’s best beaches, you probably don’t think of Latvia. Awkwardly wedged between Scandinavia and Eastern Europe, this Baltic nation doesn’t sound like the place for your typical beach break.

But what about a beach-break with a slightly darker, unsettling edge to it? Then look no further than the beaches of Karosta.

The Former Naval Base

Once a military base to the north of the coastal city of Liepaja, Karosta was slowly demilitarised when Latvia regained independence in 1991.

Occupied since 1890, the naval base hosted each of the successive ruling powers of Latvia, from the Russian Empire, to Nazi Germany and the all-too brief period of Latvian independence in between.

Today it is slowing being transformed into a new residential neighbourhood of the city after decades of being off-limits. But there are still remains of this sombre past found throughout Karosta.

The base’s former military prison now serves as one of the city’s most unlikely attractions. But what does any of this have to do with beaches?

As a former naval base, Karosta occupies a large tract of coastline north of Liepaja. It is here that you can find Europe’s most otherworldly beach.

Secluded by an ominous pine forest on the edges of the naval base, lies a stretch of pristine sand and icy, calm water.

Here trails dot the forest, bringing you to the occasional break in the small cliff and allowing you to clamber down onto the beach.

Devoid of people and silent but for the roll of the gentle waves, the nearest sections of the Karosta beach would seem like perfection for holidaymakers. Instead, beachgoers opt for the equally idyllic but far closer soft sands of Liepaja’s central beachfront.

That beach is far more convenient with just a short walk to the centre of the city and the usual facilities. Liepaja’s beach is actually one of the Baltic’s best but also quite ordinary. The beach of Karosta, on the other hand, is anything but ordinary.

It’s not the silence or isolation of the beach at Karosta that make it hauntingly beautiful. As you walk a little further north along the shore, you spy the first sign of what makes this place so eerie.

Sloped and partly submerged in the sea lies a solitary, great big concrete bunker. Once a military fortification, the bunker has fallen into disrepair, quite literally.

From its roof springs a single tree, indicating that the bunker has been abandoned for some time now. This is but the first of what is known as the Northern Forts.

Venturing past the ruin, trails re-emerge in the forest and more bunkers begin to appear. Walking about there’s not the faintest sight of another human being about, as if the secret of this place was lost with the withdrawal of the Soviet forces in the 90s.

That is until the looming presence of a modern wind turbine comes into sight and the signs of life return, with a visitor’s car park under its great swooping blades. And it’s next to the car park, that you find the heart of the Northern Forts.

While earlier there were solitary bunkers in the woods and by the beach, here a vast row of bunkers collapse into the Baltic Sea at a glacial pace.

The stoic bunkers furthest inland are simply overgrown with weeds and covered in graffiti, but those closest to the water have fared less well. Littered along the beach below are gigantic blocks of concrete, their rusted rebar exposed to the raw elements.

It’s hard to think that what amounts to a pile of building debris covering a beach could be considered beautiful, but looking out over that stretch of coast, it’s hard to find any other word that applies.

It is certainly tragic that a place like this has long been spoilt by war, but you can’t help but be captivated by the scene that has been left behind.

For lovers of abandoned destinations and of brutalist Soviet relics, the beach at Northern Forts is sure to become your new favourite playground.

The beach at the Northern Forts is actually quite a fitting metaphor for modern Latvia. It is a country of terrific natural beauty, long mired by conflict and imposition and while now free, that spectre of history still lingers, unfortunately keeping people away.

It’s symbolic of a destination not yet fully appreciated by tourists, who are unaware of what lies passed that “eerie forest”.

But it is also probable that were the beaches of Karosta crawling with visitors, it likely wouldn’t be as hauntingly beautiful.