How to Travel to Antarctica Responsibly (Must Read)

Everything you need to know on how to travel to Antarctica responsibly.

It’s one of the world’s most incredible destinations, a last frontier for tourism, and a place so remote that it’s near impossible to put your emotions into words the first time you cast your eyes over the dramatic terrain.

For most it remains as the elusive continent, the hardest to reach of the seven, and that reason alone is enough to make intrepid travellers long for a chance to visit.

Once reserved for hardcore explorers, mountaineers and scientists, modern times is seeing steady growth of what is now a budding tourism industry and the rise of things to do in Antarctica.

In recent decades a collection of expedition companies have started offering journeys for ordinary people to visit via crossing vast expanses of ocean.

By signing up for a licensed cruise, passengers are given the opportunity to travel to Antarctica, promising an experience that they will never forget.

However not all tour operators are created equal.

How To Travel To Antarctica Responsibly

As the world continues to develop, the effects of mass tourism are an unfortunate reality to consider, and even the extremities of the earth aren’t free from these consequences.

When it comes to a place as pristine and fragile as Antarctica, sustainable tourism is more important than ever, so if you are thinking about a trip to the White Continent, be proactive in your decision of prioritising the protection of the environment.

Here is our guide on how to travel to Antarctica responsibly.

When you’re researching the best cruise companies to travel to Antarctica, there will be a lot of things to think about, but the first point of consideration should go to how many passengers will be on your ship.

Some companies run what is almost the equivalent of a cruise liner that you’d expect to find in the Mediterranean, packed with up to 500 passengers in one voyage.

What this means is larger ships producing more carbon emissions, and much higher foot traffic wandering around the continent and on the water.

By choosing a company that limits the number of passengers to less than one hundred people, you’re making a conscious decision to help protect the local ecosystem, but there’s also another benefit that is purely in your advantage.

Laws state that only 100 people can be at a particular landing site at any one time, so if you’re on a ship that has more than 100 passengers, you’ll actually spend a significant portion of your time waiting for one group to finish their excursions.

Choose a company that runs small group trips and you’re not only helping minimise the impact in Antarctica, you’ll also maximise your time actually exploring this incredible destination.

Travel In The Low Season

One way to reduce the impact of travelling to Antarctica is to plan your trip in the low season, which is in the months of October, November, March and April.

During the peak times from December to February more ships are visiting and a higher number of passengers sign up for expeditions, hoping to make the most of the summer weather.

While the daylight hours will be longer in the summer, the one thing you can’t guarantee in Antarctica is spectacular weather.

We visited at the beginning of March and had picture perfect weather 5 days in a row, while two of our friends visited in December and had grey clouds and snow almost the entire time.

Besides the lower foot traffic, you may also have more unique wildlife encounters in the shoulder season, such as seeing the king penguin chicks in South Georgia in October, or the whale migrations in March and April.

Join A Company That Is Conducting Scientific Research

For over a century Antarctica has been a hub of scientific research in all kinds of fields, from wildlife behaviour to climate change and everything in between.

Things haven’t slowed down there, and in summertime 4000 people live on the continent conducting work to maintain the scientific projects and research.

While the majority of us don’t have the qualifications and skills to take up a post in the most remote place on earth, that doesn’t mean we can’t play a very small part in it.

A handful of tour operators use their ships to assist with science in Antarctica, dedicating berths for researchers, transporting goods or even conducting their own research on each voyage.

When we travelled on the Akademik Ioffe, owned by One Ocean Expeditions, the crew were monitoring ocean currents in the specially-designed ship, had reserved rooms for members of the Australian Antarctic Division, and even collected four workers who were living at Port Lockroy and transported them back to Ushuaia.

By spending your money with one of these companies you are helping support the important research that is being done in Antarctica, and you can feel proud in the knowledge that the ship you’re on is doing more than just carrying tourists across the Drake Passage.

As the only place on earth free of permanent human inhabitation, Antarctica’s ecosystem is as pristine as one could imagine.

A minuscule percentage of the whole continent has actually had man step foot on it, which has allowed the flora and fauna to grow and evolve without disturbance.

Now with more and more people visiting Antarctica as tourists, the threat of introducing a foreign species is much higher than ever before.

Tour operators maintain strict quarantine laws before entering Antarctic waters, and these are upheld once passengers disembark from the ships.

Make sure you only ever take filtered water in reusable bottles with you on any excursions, and leave all foods and snacks behind in your room.

Clothing is also poses a big risk of contamination, in particularly material with velcro, and must be thoroughly cleaned and vacuumed before being worn on the continent.

Even better is if you go with a company that supplies boots, pants and jackets, as these will be professionally washed after every expedition and kept in a secure environment that has been cleared for quarantine.

In terms of equipment, make sure the same precautions are taken. The feet on your tripod is a classic example of somewhere you might not think to look, but may have grass or natural matter squashed into the crevices from previous uses.

Take international quarantine laws seriously when thinking about how to travel to Antarctica responsibly.

Keep Your Distance From The Wildlife

This one should be obvious, but it’s very easy to get ‘caught in the moment’ when you’re trying to take photos of cute penguins or seals.

Maintaining a safe distance from the wildlife is not only for the animals protection, but for yours as well. By getting too close you may spook an animal, which might have long-term, detrimental effects on its behaviour.

Likewise if you get too close the animal may feel threatened and want to protect its surroundings. An elephant seal might seem big and lazy, but the last thing you would want is having an angry male charge at you.

The same can be said if you’re on the zodiacs. Don’t throw selfie sticks into the water to take pictures of whales if they are near your boat.

Stay at least 3 metres (10 feet) back all animals you encounter in Antarctica. On the flipside though, if a gentoo penguin walks right up to check you out while you’re sitting on a rock, you are more than welcome to make the most of this amazing experience and simply sit and observe.

Learn Before You Go

Once you’ve made the life-changing decision to travel to Antarctica, do yourself a favour and do some research on the environment, history and wildlife before you leave home.

You don’t need to become a scholar in all things Antarctica, but having a bit of knowledge about what to expect down there will allow you to appreciate everything you will experience even more, and give you motivation to want to protect the delicate ecosystem.

Read blogs, watch videos and pick a few topics that particularly interest you and it will greater enhance your trip.

If you’ve chose to travel to Antarctica with a responsible company like One Ocean Expeditions, they will actually have a huge variety of experts onboard to give daily presentations as well. Don’t miss out on these!

By giving yourself an education you can become an ambassador for sustainable tourism in Antarctica, and this could be the greatest legacy you walk away with from the most remote place on earth. 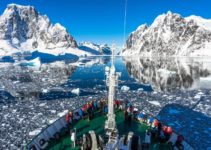 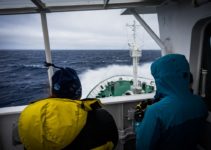 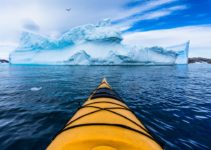 15 thoughts on “How to Travel to Antarctica Responsibly (Must Read)”