6 Adventure Activities In Svalbard Not To Be Missed

From dog sledding to hiking, here are the best adventure activities in Svalbard, Norway.

As a traveller, you’ve probably spent hours of your life perusing atlases or Google Maps. You may have noticed a small collection of islands up the top of the globe, right above Norway.

There’s a chance you could have dismissed this archipelago as being inaccessible, out of reach for everyday folk like yourself. Or, you could have gone on an Internet deep dive and discovered that these Norwegian islands are not as remote as you may have originally realised.

The archipelago is known as Svalbard. The largest of the islands is called Spitsbergen and it’s home to the northernmost town in the world, Longyearbyen. This corner of the globe is far from dull – there is a range of adventure activities to be had, no matter what the time of year, nor your own level of thrill seeking.

One note worth mentioning before we go on – there are more polar bears living on Svalbard than there are people. For this reason, it is illegal to leave the city limits of Longyearbyen, unless you’re in possession of a shotgun and you know how to use it. Polar bears have been known to attack human beings when hungry. For this reason, it’s best to stick to organised tours, rather than wandering off on your own. Polar bears are certainly best viewed for a considerable distance.

Most tours that you’ll go on will also provide headgear, balaclavas, bodysuits and boots appropriate to whatever activity you are doing at the time. Here’s a list of what you should pack for a trip to Svalbard. Spoiler alert – you’ll need a lot of warm clothing.

Svalbard is an arctic desert, which means it snows… a lot. For much of the year, snowmobiles are the best mode of transport for locals.

Your prospects for snowmobiling will be completely reliant on the weather and it stands to reason that you have a better chance of success during the winter months (also known as the Polar Night, as the sun doesn’t rise that far North during this period of the year). Don’t fret – if the elements aren’t working in your favour during your trip, there is plenty else available to do.

When I visited Svalbard, it rained rather than snowed, which was highly unusual for that time of the year (October, for all of you playing at home). With snow being an integral ingredient for snowmobiling, I chose to instead go on an ATV (all-terrain vehicle) adventure, which involved riding a quad bike up and down some of Spitsbergen’s mountains.

We headed outside of the city limits to check out Longyearbyen’s first airport and see the wreckage of a plane that is still imbedded in the soil there. Then, we drove onwards and up the mountains to visit a couple of the now abandoned mines (Norway had several mines open in Svalbard when coal was a more sought after commodity. Russia continues to mine there to this day).

This involved riding the bikes up and down some partially iced-over roads, which was a bit nerve-racking, to say the least. We were rewarded with some beautiful views and even saw a reindeer in the wild (which led to conflicted feelings when reindeer was later served for dinner).

Svalbard’s position makes it the perfect place for seeing the Northern Lights. If you arrive during the Polar Night winter season, you’ve a very strong chance of seeing this beautiful phenomenon in the flesh.

There are tours available that will take you outside the city limits and away from light pollution. Setting up shop in a small cabin, you’ll sip on coffee and hot chocolate and enjoy a delicious dinner of reindeer stew.

The lights didn’t make an appearance during my time there, so we spent the evening learning about polar bears instead. I did however get to enjoy six hours of soft, beautiful light that flowed seamlessly from sunrise to sunset. Swings and roundabouts, as the British say.

Check out our post on the best travel photography tips for beginners.

4) Dog Sledding In The Snow, Or Mud

Like snowmobiling, dogsledding is another norm for transportation purposes in the area – you’ll see signs around various hotels declaring where you can and cannot park your dogs.

Unlike snowmobiling, your chance of getting up and close to man and woman’s best friend will not rely utterly on the weather. If it’s not snowing, you can instead go dog-karting, swapping out the sled for wheels.

For all the animal lovers out there – the dogs in Longyearbyen seem especially well-looked after. Trust me on this, as I’m a crazy dog lady. The handlers knew each of the dogs by name and made their selection based on which dogs were due for a run at the time (they try to get them out every two to three days).

The dogs were not pushed to the point of exertion by any means. We stopped regularly to let them rest and they were watered before being put back in the car, to be taken home for a feed. They were happy, healthy, enthusiastic and totally up for a cuddle or ten.

During the summer months, you’ll have the option of going on various hikes around the island. Some are primarily geared towards seeing local wild or birdlife. Others will take you around Svalbard’s impressive mountain ranges, or across glaciers.

You can go hiking for an afternoon, or embark on an extensive trip that can last for days and take you from land to water via kayak. It all depends on your levels of fitness and enthusiasm and as always, the weather!

The town of Pyramiden was once a Russian mining settlement. It was abandoned in 1998, but many of the buildings and infrastructure remain intact, along with the northernmost statue of Lenin in the world.

It is possible to jump on a boat and journey north from Longyearbyen, to spend the better part of the afternoon checking out this Russian Ghost Town. The trip takes a couple of hours all up and it’s not boring by any means – you’ll pass mountains and glaciers. Who knows, if you’re lucky you might even see a polar bear wandering around.

There’s plenty to do in the Arctic North – enough to have you going from dawn to dusk, although normal daylight hours don’t necessarily apply in this corner of the world. If you’re obsessed with Nordic territories or make a point of travelling to off the path places, this beautiful arctic archipelago is a must visit.

About the Author - LC Hunter

LC is an "ex-expat". Having lived in the UK and Qatar over the last few years, she is currently re-exploring her home country of Australia and hopes to eventually set foot in every state and territory (7 down, 1 to go!). She’s also an environmental nutcase and regularly writes about eschewing plastic on her blog, Birdgehls. Her life's ambition is to one day live on a farm in Tasmania with 11 dogs, a miniature pig and several pygmy goats. 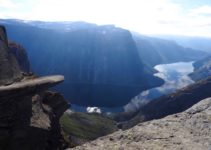